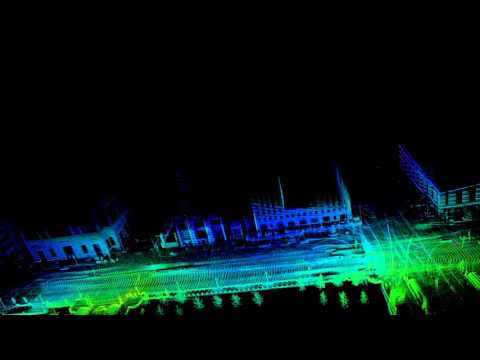 Kaarta is a member of the Automated with Velodyne™ program.

McVeigh & Mangum Engineering, a multi service professional consulting firm with offices throughout the southeast US, was tasked with mapping an aging hospital in North Carolina. What began as a simple consult for fire protection plan development had, 9 months on, transformed into a massive initiative to document the hospital with digital mapping. The final phase of the project was to capture the 7,400 square meter (80,000 square feet) lower/basement level of the hospital, which is a crawl space. An intricate maze of low-hanging pipes, conduit, and other complex mechanical systems, with a vertical clearance between 1.2 meters (4 feet) and 0.3 meters (1 foot), there is not enough space to set up a stationary tripod scanner, and not enough to hand-carry a unit without breaking a back. At grade, the floor was predominantly concrete but transitioned to bare dirt in sections, making traversing unsafe. Guess what else? It was August in North Carolina. (It was hot in there, folks). The temperature of the crawl space approached 44°C (110°F), so the faster the capture, the better for everyone involved, persons and machine alike.

McVeigh & Mangum’s Director of BIM-FM Services, Jacob D’Albora, knew traditional survey methods would not fit the bill for this area; there’s no space for setting up a tripod, let alone the room needed to maneuver the scanner from station to station. So, Jacob connected with Kaarta, the innovator of mobile reality capture solutions, to brainstorm a mobile mapping-centered solution.

A look at the hospital crawl space, from eye-level, with its intricate pipe system.

Initially, the team envisioned Contour as a potential answer, given its premier indoor mapping competencies. However, once the environment of the hospital was discussed in detail, and the constraints involved more fully formed, it was clear that a system could not be walked or hand carried through the scene. Stencil 2-16, which incorporates a Velodyne Puck™ lidar, is highly customizable and can be used for various interior applications, emerged as the practical solution. With integrated 3D mapping and real-time position estimation and 16-line laser density, Stencil can rapidly capture and process data, even in GPS-denied areas. More importantly, it can be mounted to a vehicle to negotiate through the tight and constricted hospital space. The search ensued for the proper vehicular fit.

There are currently many other unmanned ground-based robots on the market. Although durable and reliable, they were cost prohibitive for this small, one-off project. McVeigh cycled through the range of transport options. The rover had to be sturdy enough to support the scanning equipment, squat enough to squeeze under the low-hanging portions of the crawl space, and fast enough to scan the steaming-hot underbelly of the hospital pretty darn quick. The initial front runner was a remote control tracked platform, which provided the stability and durability required for the task. However, once Stencil was mounted to the tank it became evident that the system was still too elevated to fit below the lowest vertical clearances.

After additional investigation and testing, D’Albora found the perfect solution. It was a 4WD suspension platform typically used in the film industry as a trolley for low-angle camera shots. The King Motor RC 4WD Buggy has the payload capacity, rugged construction, and powerful drivetrain to negotiate the project area. A cheese plate mount, used to affix cameras and camera accessories to the buggy through a variety of threaded holes, made it easy to attach Stencil and components securely and safely to the platform. Finally, an LED lighting panel was added to the rig to enhance the visual odometry of Stencil’s feature tracking camera in the dark environment.

Final buggy setup! Note Stencil is mounted directly onto the RC to reduce overhead clearance, with other components arranged to still allow full field of view.

Once onsite, the team tested the rig and the quality of the resulting point cloud. After a handful of test runs and a few on-the-fly tweaks to the setup involving mounting Stencil directly to the cheese plate to reduce the overhead and re-positioning other components to allow Stencil a full field of view, the rig was ready for action. The Velodyne Puck’s 360° horizontal FOV and its 30° vertical FOV proved an excellent match for the application.

In just under one hour, the 5,200 square meter (56,000 square feet) pilot portion of the basement was captured in three separate scans. Although Stencil is fully capable of continuously scanning, the team wanted to keep the runs small and manageable, allowing them to review the data in real-time and make any as needed adjustments. After scanning, the three point clouds were processed using Stencil’s advanced software tools and merged successfully into a single registered point cloud. The intricacies of the pipes and basement-level details were captured and the resultant point cloud, of 345 million total points, was pushed to McVeigh & Mangum’s BIM workflow for modeling in Revit.

With a successful pilot project under their belt, Jacob plans to scan the remaining portions of the crawl space within the next few months and provide a comprehensive built environment to the hospital. Their developed BIM solution will provide the hospital administration and maintenance with a more efficient method of planning, design, construction, and general management of the building and its infrastructure.

The custom-mounted Stencil remedy for this particular circumstance highlights the need for a nimble device in real world applications. Because field conditions can be different on every project, the flexibility to mount the scanning system onto a drone, or a car, or use on a pole, or manually walk it, is paramount. The user can decide which approach is the right one. As seen in this case, even the best laid plans need adjustments in the field. As any experienced professional knows, once onsite variables may change (that’s likely an understatement). Investment of time and money in an adaptable tool means you invest in a system only once, and can customize parameters extemporaneously.

Stencil enables fast site deployment, even in remote and difficult to access locations, making it suitable for a range of applications and environments. No GNSS? No problem. Stencil doesn’t need GNSS or other infrastructure for fast, accurate, and low-cost 3D real-time simultaneous localization and mapping. With an intuitive interface and real-time mapping visualization, the system can easily be operated by one person, thus saving on site labor and travel. The data capture was successfully completed in under one hour, without the challenges of having to complete repeated set-ups and scanner calibrations. Render of the unified point cloud of a large hospital crawlspace. This environment would be very challenging for a stationary scanner as well as a mobile scanner. The space averaged 1.2 m (4 ft) in height and was 5,200 square meters in area (56,000 square feet).

Our specification for the operation of the lidar in our products is very demanding. Our systems depend on low shot noise, high density, long range and require conformity to quality tolerance limits. For our Stencil product line, Velodyne Lidar fits the bill perfectly, providing the best performance to meet our extremely high standards.