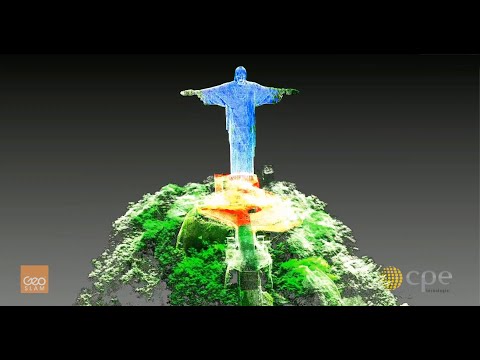 GeoSLAM makes it easy to capture and connect data from the world around us. From the built environment to the natural world, GeoSLAM technology gives people the power to collect geospatial data from some of the most difficult environments, whether they are indoor, outdoors or underground. Pioneering highly versatile and adaptable solutions using 3D SLAM (Simultaneous Localization And Mapping) technology, the GeoSLAM family of geospatial hardware and software solutions provide rapid and easy mapping, and highly accurate monitoring solutions.

GeoSLAM technology is used globally by anyone needing to create a digital twin of their world, quickly and accurately. Some of the most recognizable locations scanned by GeoSLAM technology include the Sydney Opera House, Lincoln Memorial and Arc du Triomphe – all without bulky equipment or long set up times.

GeoSLAM is a member of the Automated with Velodyne™ program.

Standing atop Corcovado Mountain and overlooking the city of Rio De Janeiro, Christ the Redeemer is an iconic manmade structure and one of the new seven wonders of the world. Revealed to the world in October 1931, the statue has become one of Brazil’s largest tourist attractions. In 2019, it was visited over 2 million times by people from all over the globe.

Ahead of the statue’s 90th birthday restoration, GeoSLAM was tasked with creating a digital twin of both the outside and the inside of Christ the Redeemer. To support restoration efforts, it was essential that both the exterior and interior were mapped. With the inside of the monument being a series of steep and narrow staircases, traditional surveying techniques or bulky equipment would have been impossible to use in the project.

The statue has a high volume of visitors every day, so scanning the monument fast in the time allotted to the team while also maintaining accuracy were critical to project success. Given the size of the structure and the intricacy of its inside, the team used the GeoSLAM ZEB Horizon, equipped with Velodyne’s Puck LITE™ lidar sensor.

To complete the scan, the area was closed to the public, allowing GeoSLAM and a small group from CPE Tecnologia, GeoSLAM’s Brazilian dealer, to scan the entire site. With the versatility of the ZEB Horizon and its UAV capabilities, the whole site was scanned – inside and out – within 45 minutes. Emitting 300,000 laser points per second, the narrow staircases and tight internal passages were captured with ease and precision. For the external scan, the GeoSLAM team mounted the ZEB Horizon to a UAV and captured the statue in great detail from the air.

The top of Corcovado Mountain has its own mini-weather system. On the day of the scan, thick fog rolled in from the ocean. Lidar was able to “see” through the fog with ease, not affecting the end result.

With the monument only closed off to the public for a short period of time, the GeoSLAM team had to work effectively with the statue’s on-site team to meet timing requirements. Due to fast processing of the data while still on site, a full point cloud of the Christ the Redeemer statue could be reviewed at the summit. This review confirmed that all the required data had been captured, removing any need to return to site to complete the work.

A full 3D model comprising of 180 million points was delivered to the on-site team to help them with their restoration plans. The data can be seen and downloaded from here. “The statue of Christ the Redeemer is symbolic for our country. Rio is vibrant, full of life and surrounded by beautifully designed buildings. It’s a surveyor’s paradise. It was a blessing to be involved in this project and to see the results come to life. There’s no other 3D scanning product that could navigate the space with the same ease and speed.”

“Because of the strength of the ZEB Horizon and SLAM feature, it was possible to map this vertical work of art, even the complex framework and internal columns, very, very quickly.”